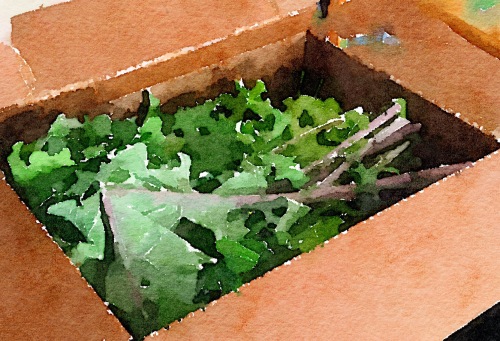 In September 2014, two months after I first moved from the City House to the Country House, we passed our pick-up-in-Manhattan-every-Thursday CSA share to friends who lived uptown, rather than cope with the steeplechase of office-in-midtown to pick-up-spot-on-the-UWS to train-station-in-East-Harlem to Country-House-in-Connecticut. I’ve been looking for a replacement ever since, but suburban CT assumes that tasks like Farmer’s Market shopping and CSA collection happen Monday through Friday during the workday. Not so much for us commuter-types, alas.

Luckily for us, an enterprising little business realized that the gap was an opportunity, and we discovered a CSA program with a weekly home delivery of fruits and vegetables, with a significant advantage over the other: no obligation to volunteer at the pick-up point. (I like community, and I like volunteering, but I prefer to be able to control the scheduling of mandatory hours.)

Anyway, back to our CSA. This past Tuesday was our first delivery day, and wow, am I loving having such a fabulous early haul to celebrate. In the first box, we received:

That’s a lot of green for two non-vegetarian people to eat in a week, but we’re making the best of every delicious bite.

The chives were finely chopped into a rich creamy bowl of butter, which was whipped until all of the herb was incorporated, then wrapped in cling film and rolled into a tight cylinder, and chilled through in the fridge. Amazing on fresh bread, but even better when used to butter-baste a steak.

Garlic scapes and spinach were combined with Parmesan cheese, pine nuts, and herb- infused olive oil to make a smooth, fragrant, and super fresh-tasting pesto. It will keep for a couple weeks in the fridge, and we’ll use it as a thickener and flavor agent in sauces and dressings, as well as a sandwich spread.

The green garlic and kale went into pasta dishes – separately.

Much of the garlic’s stem was too woody to be used, but we sliced the bulb very finely, and sauteed it with some tiny, tender asparagus tips in olive oil, salt, and fresh pepper. The mess was then covered in petite-diced tomato and a fistful of fresh oregano cut from the garden, and the flavors melded over low heat while the pasta cooked. We tossed the sauce with fettuccine and parmesan, and ate it by the forkful (on Thursday) while watching an episode of Guy’s Grocery Games on Hulu.

On Saturday, we cooked the remainder of that fettuccine, and served it with the Kale, which was tossed with a chicken breast that had been marinated in Italian dressing before a quick stir-fry, and halved cherry tomatoes, then stirred into the pasta with Ciliegine mozzarella and a heaping spoonful of our freshly-made Pesto. Our bowls were empty before the Signature Bake of Cake Week had been judged on S4E1 of The Great British Baking Show.

We passed both kohlrabi to our neighbor, since she expressed interest in a vegetable I can’t stand, and it’s likely that the bok choi will be composted since neither of us enjoy eating it. But the rest of our take is currently spread across the kitchen counters as he works on dinner: a Frittata with onion, asparagus, tomato, mushroom, and Wisconsin cheddar, served with  Hasselback potatoes, a green salad made of some of the lettuces, and pan roasted radishes (olive oil, salt, pepper, Worcestershire sauce).

The lettuce that remains will be tossed into a salad (tomato, cucumber, olives, and crumbled cheese left over from a party platter we made last weekend, dressed with some balsamic vinegar and a hint of the pesto). I have no idea what we’re doing with the rest of the onions, but they’ll have to be the star of Monday’s supper.

And since I’m a data nerd, I’m tracking what we spend on produce during CSA season, to be sure that we’re being careful stewards of our bounty. This week’s costs are:

This entry was posted in Veg Box Chronicles and tagged CSA, Vegetables. Bookmark the permalink.