I have been thrilled about this particular spring, with its chilly mornings and the need for jackets all the way til the first of June. The bleeding hearts, forsythia, hosta, hydrangea, ivy, and rhubarb in my garden have been busting out new leaves and vines and blossoms (where appropriate) everywhere. But with a few truly scorching days wilting my new bean shoots and the potted tomato plants on the deck this last week, it’s obvious that rhubarb season is drawing rapidly to a close. In the space between a few rain drops, I harvested the last of my stalks yesterday afternoon; the woodchuck who lives in a den burrowed into the stone cliff behind our house can have the little nubbins that are left.

6 tender stalks of rhubarb, the last of our harvest for 2017

But what to do with them? We’ve already made:

All chopped, the yield was only about a cup of minced pieces, which I knew would cook down to just about nothing.

All of the recipes that looked interesting to me require more than that, so I had to get creative. Verdict: another Smitten Kitchen gem,  Varied Fruits Cream Cheese Hand Pies.

He made the pie crust. (I have zero knack for it, even though this particular recipe is foolproof.) I made the cream cheese filling. I made the rhubarb filling. And when I had more than twice as much cream cheese filling as rhubarb, I made another filling from blueberries and apricot. And after several hours in the fridge, and over several more hours of do-a-little-work-then-chill-everything-back-down…

The rhubarb filling was just enough to fill 6 little pies, and they looked pretty sweet both before and after baking. (That pastry recipe really is amazing.)

And the blueberry version became another story. Realizing how much blueberry-apricot filling and cream cheese filling I was going to have left over, I opted for something different. I rolled out the remaining pie crust for an attempt at my first ever tart with something like a pastry cream filling. I used a small, deep Corningware casserole dish rather than a shallow tart pan, layered the cheese and then the berries into the pastry, and attempted a “rustic fold over edge” that collapsed in on itself in the oven. It’s far from the prettiest thing I’ve ever made, and he cut into it for our dessert last night before I could take a picture, but oh my word was it tasty. 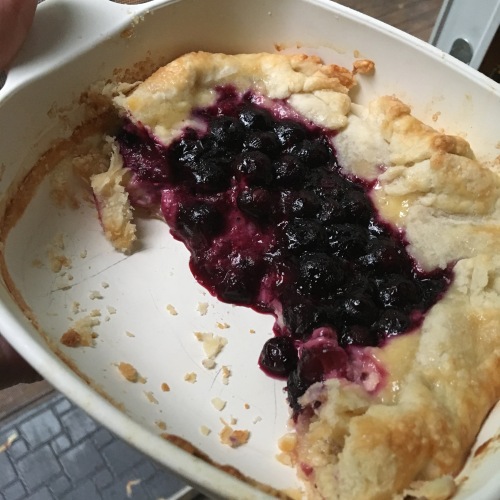 So, rhubarb season is over. Not only did we not waste a single stalk of what we grew, every bite was delicious. This is year three of growing things-humans-can-eat in our little garden, year one of using up every bit of any one ingredient, and year one of loving everything we cooked with it. That’s a very particular kind of success.

Posted in Eat What You Grow