The Luck of the Not-Quite-Irish 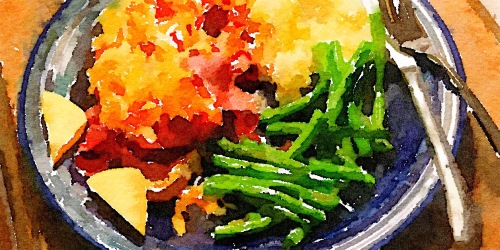 Aside from Thanksgiving turkey, holiday celebrations at the Country House don’t call for a specific food. Christmas is Christmas, whether there’s boeuf bourguignon or leftover spaghetti on the table. Memorial Day might be the unofficial start of summer’s grilling season, but what goes on the grill varies from year to year. There might be pork on New Year’s Day, but whether it’s smoked sausage or spare ribs doesn’t matter to us.

Then there’s St. Patrick’s Day. That’s not a big deal. Neither of us claims significant Irish heritage. The thing to celebrate, really, was the successful opening of my show that meant A Weeknight at Home—the first in ages. We certainly weren’t going to celebrate with green beer. (Ew. Whether it’s green or not.)

Fried chicken would have been appropriately festive, but I wanted to do something out of the ordinary. A slow-braised pot of corned beef and cabbage would be a nice change, but I don’t have a time machine that would have let start the braise before we left for work. If I wanted to be even remotely Irish-themed, improvisation would be required. Or, at least, a trip to the deli.

I picked up a pound of sliced corned beef. A bag of sauerkraut. Carrots were in the fridge at home. I considered letting the prepared-foods counter do the work of mashed potatoes, but a two-serving tray seemed awfully dear at $12.99, and a 5-pound bag of spuds was on sale for under a dollar.

We nibbled a little aged cheddar-flavored-with-Irish-whiskey as a starter.  That was as close to drunken debauchery as our St. Patrick’s Day would get.

I scrubbed and diced the potatoes, skin-on: the mash wouldn’t be as creamy, but it’d be healthier. Besides, I like potato skin. In the time it took the potatoes to cook, I rinsed the kraut and grated a couple of carrots into it to temper the tang, and added a little caraway seed and a grating of black pepper. This went to warm in a saucepan. (Sauerkraut is, of course, not part of an authentically Irish corned beef supper. So what? We like kraut.)  The corned beef was tossed in a hot skillet until slightly crisped.

The kraut-and-beef was piled on toasted home-baked bread. It wasn’t rye, but home-baked seemed more authentic–or at least better than store-bought. A semi-fluffy mound of mash said “Potato famine? What potato famine?”  There were green beans, just because. It was not in the least what Paddy O’Whomever’s ma would have served, but we enjoyed it.

As for luck? Well, sometimes you make your own. 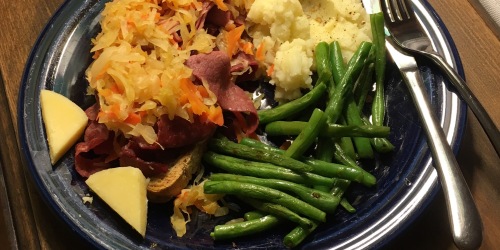 This entry was posted in Uncategorized and tagged Beef, Dinner, Holidays, Sandwiches, Vegetables. Bookmark the permalink.