To Be or Not to Bibimbap

She likes rice.  A lot.  A bowl of rice with butter, salt, and pepper would be a perfectly acceptable dinner for her any night of the week.  I like it well enough, though I prefer mine as an accompaniment to vegetables and protein, or at least custard-ed up and baked into pudding. Still, we haven’t had any in a while, so I made a batch and plated some up with a pork chop and some green beans, covered the plate with plastic wrap, and left it for her in the refrigerator.  Having two choir rehearsals scheduled with a little break between, I packed yogurt and fruit for me.

Maybe it was the second choir rehearsal that did it; maybe it was the quite-fast run I’d gone on earlier in the day, or the run and two walks I’d taken on Wednesday; maybe lunch had been insubstantial, or the fact that I’d forgotten the granola that usually accompanies the yogurt and fruit. Whatever it was, it was 10 PM and I was hungry.

And there was rice in the fridge.

It’s a traditional Korean dish: a bowl of rice, protein, pickled vegetables, and a fried egg on top. If you’re a purist, bibimbap is made by adding rice to a very hot stone dish.  I am not a purist.  Especially not at 10 PM. I shredded some carrot, chopped some parsley and dill pickle (kimchi is traditional, but not something I keep on hand), and microwaved a bowl of rice while frying an egg whose runny yolk would, along with a drizzle of soy, a couple drops of sesame oil and sriracha, become an intensely flavorful sauce.

It surely isn’t as simple as a bowl of rice with butter, salt, and pepper, but it was maybe six minutes from idea to first bite.   I had my late semi-simple supper with a glass of ginger ale, and a conversation about a lunch we’d had, maybe five years ago, at a Korean restaurant down the block from her office—long, long before it occurred to either of us that we might one day be sharing the Country House.

I can’t remember having bibimbap since that lunch, but it won’t be five years before I have it again. 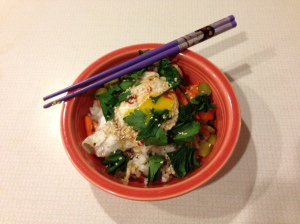 In slightly more than the time it takes to fry an egg, a few scruffy vegetables and some leftover rice can become this.