I finished teaching and walked downtown; she finished at the office and walked north; we met in the middle for the fall’s first “school night” trip to the theatre.

Theatre-date dinners require some strategizing.  When a show has an 8 PM curtain, there’s time for a relaxed meal before; an intermissionless play with a 7 PM curtain means it won’t be too late for dinner after; but a full-length play starting at 7 leaves just enough time to grab something nearby.

A respectable pizza-and-sandwich shop awaited us at the corner of 47th and 8th. There were two stools at the counter by the window from which we could people-watch while eating. (After she took a photo of our dinner, she realized she hadn’t been mindful of the passers-by. “That could have been Alec Baldwin!” I’m pretty sure it wasn’t.)

My pepperoni-spinach-and-onion slice was remarkably tasty, a little like getting a salad along with the pizza.  She went with the cheese-only variety; a purist.  Thin but pliable NYC-style crust, hot and quick. It wasn’t the most luxurious meal we’ve ever had, but it was just right. 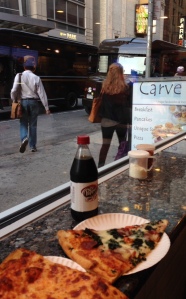 (The Country House  is a new play about a theatrical family–actors and a playwright-to-be–and contains lots of literary references, as well as a “reading” of a new play.  Since last night was only the second preview, it wouldn’t be fair to discuss the performance in detail.  The play is very self-referential.  But then, so is writing about it in a blog about dinner.)