This has been a long, cold, snowy winter, and the end seems frustratingly out of reach, still.  We’re tired from the extra hours of fuss and worry and the poor quality of light, and sore from shoveling snow and digging out cars and throwing salt.

But I’m so grateful that the only effects of it have been inconvenience and some discomfort for us and the people we love. We’re warm and dry, well fed and well attired. And we seem to be making a real effort to stay connected to one another rather than to hibernate. To find beauty in this winter land (that can so easily become un-wondrous). To laugh and smile and lift one’s spirits.

“We should go to New Orleans,” she said. I had a rough time picturing her amid the revelry of Mardi Gras. “Of course not!  But a couple of days eating beignets and drinking Hurricanes…”

I’m unconvinced that there would be Hurricanes (plural), however much they seem like “Red Kool-aid, perfect,” but I could be wrong.

I didn’t feel up to the challenge of making beignets, but there were a couple of donuts in the kitchen, the last of a dozen we bought earlier in the week. They were a little old, even for dunking in our cuppas, but they weren’t too far gone for a little transformation.

Slice the slightly-stale old-fashioned donuts through the center. Toast in the pan, cut side first, about three minutes per side.

Warm and soften about 1/2 cup fruit–whatever’s at hand. Berries, maybe, or sliced apples in a little butter and brown sugar.  I had some chunky, well-spiced homemade applesauce, and that was perfect.

Plate the donuts, cut side up; spoon on the fruit; add a dollop of whipped cream; sprinkle on a little cinnamon and grated nutmeg.

Serves two, one of whom may say something extravagantly complimentary. 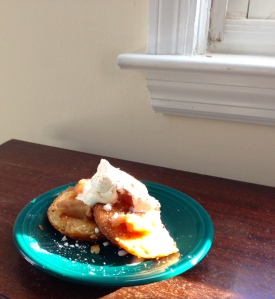 The omelets we were planning for breakfast became a very late brunch.

She asked how I felt about stuffed peppers.  I like the idea more than the execution; the pepper flesh always seems slimy when baked.  She had an idea. I chopped some vegetables for her, and she did the wonderful rest.

Stuffed Pepper Casserole
(All the Flavor, None of the Slime)

In a saucepan, add 2-1/2 cups boiling water, 1 tbsp olive oil, and 1 cup white rice.  Cover and simmer for 20 minutes.  (The rice may seem underdone, and will be a little sticky, but that’s okay.)

Dice 1 onion, 2 ribs of celery, and 1 big bell pepper (2 peppers might be even better.) Trim 1/2 lb. green beans and slice into small pieces.

Push the beef to one side of the Dutch oven, and add vegetables to the other. Sauté until just softened.

Add most of the rice to the Dutch oven, reserving a third of it to make fried rice later in the week. Also add 1-1/2 cups marinara sauce (or a 14-oz can of diced or crushed tomatoes). Mix all together. Cover and bake at 350F for 30 minutes.  While baking, fold some laundry or try on some clearance-special clothes or watch an old game show.

Serves 4—or, at least, two hungry people, with plenty that will be looked forward to for lunches.

Thank you, winter, for being hard, and bringing out some of the best in us.