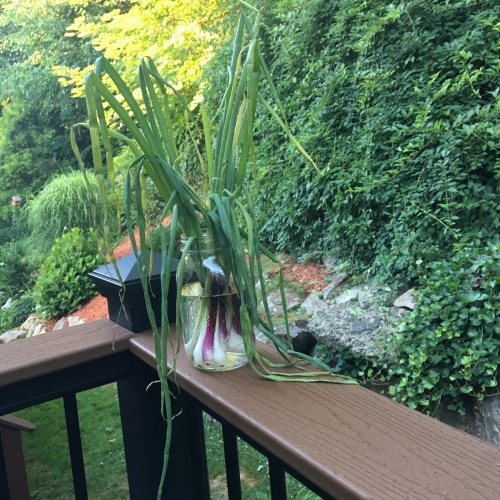 Onions on the deck in the early morning light.

While I usually try to keep Sunday’s free from obligations so that we can recharge at home, yesterday was most definitely busy. Clay worked in the morning and led a pair of meetings in the afternoon, while I spent many hours in the car; three friends whom I haven’t seen in 22, 10, and 2 years collaborated on a brilliantly moving song cycle, and I attended the American premiere performance. To say that it was a deeply moving experience is quite an understatement.

Anyway. Amid all that, Clay swung by the Farmer’s Market to see Max and collect this week’s share. Since our time for cataloguing was brief, we’re a bit light on the details; I’ll do my best to revise for volume later this week.

How to Store CSA Vegetables

Storage this week is so easy. The onions went into a jar of water (which now feels like a kitchen staple on our sideboard!). We wrapped all of the greens and put them in the high-humidity crisper drawer along with the cabbage, cucumbers, and squashes. Voila – finished!

I am thrilled with this week’s share in particular, because there are some dishes that I’ve been wishing on that we now have the makings of!

While more of an autumn dish than a summer one, I love these flavors together. Clay is writing a musical featuring Hades and several mentions of pomegranates, so it’s making me hungry for sharp, sweet-tart bites. Nuts and seeds are fabulous in chopped salad, making it excellent for filling take-along lunches, and we have an abundance in the pantry.

Risotto with Chard and Mushrooms

I adore risotto, and have quite a good time with the constant stirring. I’ll cut our chard into long ribbons and combine it with porcini mushrooms for bursts of rich, summer flavor.

We enjoyed cabbage in delicate slaws over nachos and in burritos last week, so I’m looking forward to more of that on our sandwiches this week. Pastrami, havarti, a tomato spread, a bit of mayo, and a peppery slaw on Clay’s sort-of-sourdough bread sounds so good!

The dill in my garden is exploding with seed pods, so I’ll turn those pickling cucumbers into garlic dill pickles as soon as I have 30 minutes in the kitchen!

The roasted vegetable and gnocchi salad we made on Saturday is wonderful, but could do with a bit of fresh crunch. We’ll tear up those salad greens and mix them into the next portion for extra color and freshness.

I’ll definitely make more squash chips. I’ll make another frittata, though I’d like to try adding a bit of acid to the dish – maybe roasting tomatoes alongside squash for the filling. The scallop squash is supposed to be fantastic when fried, and since we still have some chèvre from Lost Ruby Farm I’ll turn it into summery squash latkes. And I’d like to try stuffing the pattypans in the style of stuffed peppers (which could be an excellent way to repurpose any leftover risotto).

Who wants to join us for dinner?

This entry was posted in Veg Box Chronicles and tagged CSA, Vegetables. Bookmark the permalink.