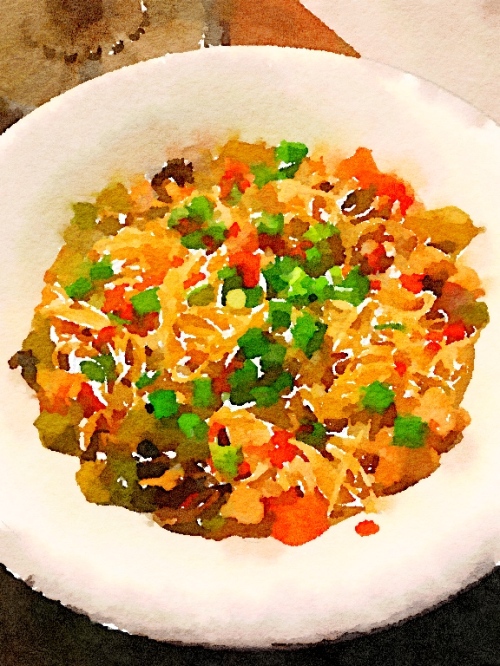 It was Saturday morning, and we were making a slow start of it. She was playing a video game on her phone, the cat was snuggled at her feet, and I was reading Twitter.

I was scrolling past the seemingly-endless political stuff, passing the tech news, dodging the ads, when a friend’s retweet caught my eye.

I laughed out loud at the thought of it, and showed her, and she laughed, too. “Yours,” she said, would be, ‘I’m going to eat all the Brussels Sprouts.'” And I laughed, because I was thinking exactly the same thing, and made that comment in a reply to the original poster.  The replies got more absurd and delightful. “I’m going to build a water slide in the basement,” one said.

And then women were getting involved, making it clear that it wasn’t only the men who eat less than prudently when they’re alone. One poster suggested she would make Blue-box Mac and Cheese and eat it out of the pan with the spoon she used to stir it. “This is your spiritual sister,” I said. “Nope. This is me!” she replied. By this point it was pretty clear I was going to read the entire thread, even if it meant I got nothing else done.  (She, for her part, had gotten up, dressed, and headed off to an eye exam and a trip to the market.) I kept going, through very specific “eat something stupid” replies, many focusing on chips, pizza, and Ramen noodles.

I haven’t thought about Ramen noodles in ages, but all of a sudden I wanted them for lunch. Sure, it was quick and easy and—most importantly for college students—cheap, not what anybody would call great cuisine, but maybe a little comforting. Sort of like blue-box macaroni and cheese.

I switched over to the shopping-list app and added Ramen noodles and scallions, and dressed to go out for a run.

She hadn’t found the five-packages-for-a-dollar variety. The Ramen she brought home was the real stuff—no MSG-filled flavor packet to be found, which was just fine with me. I hadn’t planned to use it anyway; I was thinking of one of the folks who posted about mixing in “a soft boiled egg, if you want to be fancy.” I didn’t know about fancy, but I did want it to be good.

Serves 1, because you know what she really wants for lunch isn’t Ramen.

In a small bowl, pour a quarter-cup of boiling water over the dried shrimp.

Pour a little olive oil in a skillet and put it over medium-high heat.

When the oil is hot, add and sauté the mushrooms, carrot, and pepper. When the mushrooms are nicely browned and the others have softened a bit, lower the heat a little and add the garlic and ginger; toss, and continue to sauté until the aromatics are, well, aromatic.

Add the soy sauce and fish sauce, toss to combine.

Add the shrimp and their liquid, and the stock. Increase heat until the liquid is at a brisk simmer, then add the noodles and put a lid on the skillet. Cook 2-3 minutes (or per package directions).

Remove and serve, garnished with a few drops each of sesame oil and sriracha, and the chopped scallions.

While you are doing all of this, of course, prepare one package blue-box mac and cheese. Offer her the pot, and the stirring spoon to use as a utensil.