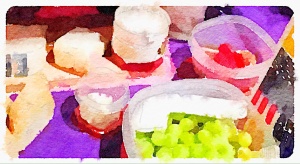 Our first date, long ago, was a picnic in Central Park. Cheese, olives, baguette, grapes, and white wine sipped from plastic cups, while we sat on a bench under a pretty tree and talked for hours.

When I was commissioned to write a short musical based on the story of a couple who met in a specialty food shop, the first step in my research was a field trip to the shop. It was mid-October and cool, so a Friday-night park visit wasn’t appropriate, but we brought the feast we purchased back to the City House and had a floor picnic.

I took slight poetic license to give the story’s couple a first date similar to ours. In the last song, they bemoan their ability to find a suitable place to go:

You take an old pal to your favorite haunt.
It’s hard knowing what someone new would want,
But if we can’t agree on a restaurant,
Where do we go from here?

Then he gets an idea and proposes they take the baguette and duck rillettes he’s just bought, pick up a nice pinot noir at the wine shop around the corner, and find a bench in the park. She’s skeptical about the idea of a picnic. It seems like all is lost when she gets up and starts to walk back into the store. Then she turns and says she’ll bring dessert. One last F-major chord plays as lights dim on their happy ending-that’s-really-a-beginning.

On Saturday, we went to see the new show at the theatre where I’d just finished working–a play by one of our favorite authors, Aaron Sorkin. It’s a cabaret-style theatre, meaning the audience is seated at tables rather than in rows of seats facing the stage. Patrons are invited to bring their own snacks or meals. Deciding what to bring for A Few Good Men wasn’t quite as daunting a task as the characters in Blue Apron faced, but it was a challenge. “Should I order Thai?” she said. “Well,” I admitted, “we can’t pick up burgers from the Awesome Burger Place.” (She likes hers Well Done, and they can’t seem to get that right.)

“Wait,” I said, joking. “I’ve got duck rillettes and a nice loaf of bread. I’ll go to Oak Barrel for a nice pinot noir and we’ll find a bench.”

“A picnic,” she said. She knows the script, maybe better than I do. She has that kind of memory.

She didn’t have to think about it as long as Laura did. “I’ll bring the macaroons.”

As it turned out, she brought everything; I’d been working all day. Juicy andouille sausages, paté, an assortment of cheeses, sliced baguette, grapes, and Mason jars full of ice from which we drank sparkling cider. No macaroons, but  strawberries, which I like even better.

The Saint Andre cheese was a little too funky for either of us. The Lemon Stilton–a semi-firm cheese studded with bits of candied lemon peel–was fun and bright. We both liked the goat’s-milk cheddar. Our picnic supper was wonderful, and if every aspect of the production wasn’t quite perfect it was still enormously enjoyable.

At intermission I got up to stretch my legs a bit. I hoped to find our friend the director and tell him how much I was enjoying the show, but he wasn’t to be seen. I returned to our table. She looked up from her iPhone.

“So,” she said. “We’re sitting in a theatre we both like, seeing a wonderful play. It’s two minutes until the second act. Wanna get married sometime?”

We’ve been to a lot of plays. We’ve had more than a few picnics. It will be awfully hard to top this one. 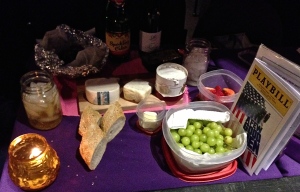 This entry was posted in Uncategorized and tagged Cheese, Fruit, Picnics, Sausage, Theatre. Bookmark the permalink.

2 responses to “A Few Good Picnics”