My grandmother had a pre-wrapped gift box. I’m sure it had once been a beautiful thing, but by the time I came to know it, it had seen better days. Its glittered and flocked exterior showed plenty of wear. The ribbon wrapped around its lid was more than a little frayed. The bow formed by that ribbon would never be as pretty and puffy as when it was new.  But every Christmas, it came out of her closet, and was filled with a token gift for her youngest son, my uncle. And on the day after Christmas, she’d take the box back and put it back into her closet to wait for the following year.

After she passed away, my mom found the box and continued to use it for her baby brother’s Christmas present–which was usually a small batch of his favorite cookie, wrapped carefully in plastic so it didn’t damage the box. (The rest of the cookies were presented in a more practical container, usually a zip-top bag.) As time went on, those orange flavored cookies with a faint orange glaze might not even have been my uncle’s favorite, but they were tradition.

My grandmother’s recipe collection is in storage while renovations on the Country House are underway. This might not be her exact recipe, but it’s close.  While she was living, nobody but my grandmother baked the orange cookies; then, only my mother did. One of my cousins does it now for her dad.

We don’t have many solid food traditions here. Turkey on Thanksgiving, sure. But we’ll have fried rice on New Year’s Eve, or popcorn for Christmas, or pancakes any night of the week if that’s what we feel like doing. That might change; we’re still figuring things out.

Her aunt–who is as much like a big sister to her as anything else–is known in the family for her lemon squares. They’re requested for every big family occasion, and nobody else makes them. Her aunt gave us the recipe–not because she’s handing over the reins, but because we’re far enough away that we aren’t encroaching on her turf. I’m honored. And delighted. I made a batch last Easter, surprised that I so enjoyed a recipe that had ingredients I’d never otherwise use: Cool Whip? Pudding Mix? I’m a from-scratch guy!

When we were invited to a friend’s home for Easter dinner, her aunt’s lemon squares the first thing it occurred to us to bring. We tag-teamed: I baked the shortbread crust before I left for rehearsal; she took it from there. Creamy, tart, and addictively delicious, they were of course a hit.

I’ve seen variations of the recipe on lots of sites, so I don’t know that her aunt invented this treat; it seems to be a family tradition that only she made them.

And now we do, for Easter. Pudding and Cool Whip. Life is full of surprises. And unexpected traditions. I think I’ll bake some orange cookies at Christmastime. I’m looking forward already to next Easter. 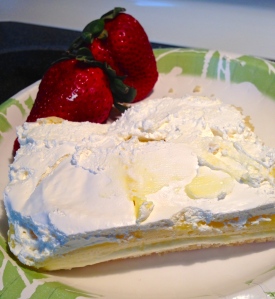 At the end of Easter dinner, one remaining Lemon Square might look as forlorn as an old Christmas gift box–but it’s every bit as delicious as new, and as full of love.