It has been one of those weeks.

For a project with “dinner” in the title, there has been a whole lot of no-dinner-cooking at the Country House.

I missed a train on Monday–by moments!–and so had to drive into New York in order to get to a meeting.  She met me after, and we drove home together, but by the time we arrived, nobody much wanted dinner. (It could have gone entirely the other way; we might have wanted all the food there was, and then some.)

We both worked late on Tuesday, and had had late lunches; again, no dinner-making.

Wednesday was a theatre night; last weekend, I realized that she’d never seen a long-running musical written by two friends of mine, so we went to see it; we met for a bite on the way. I took a photo of our dinner, but the meal hardly seemed like writing about. The food was fine; the show was delightful.

She worked really late on Thursday in order to take a train that arrived just in time for me to meet her after choir rehearsal. I made us a snack to eat while watching a little TV before bedtime, but it wasn’t a real meal.

On the way to a slightly-later-than-usual train this morning–which she’d decided to take after working late four days in a row–we decided that we were going to stay in this evening.  No theatre, no movies, no trips to furniture stores, no visiting friends; a night at home. She asked for “something light.” I’m glad I asked her to be more specific; given that direction, I might have made a big green salad. She had in mind some white fish; perhaps some rice; and maybe green beans or asparagus. It sounded like a plan to me, so I stopped at the market on the way to meet her evening train.

The menu was her idea, so she started cooking.  (Also, I couldn’t do much in the way of meal prep, since she had me sticking my head under a towel with a bowl of steaming water and herbs to clear a stuffy nose. I was, however, able to look up fish-baking time on my iPhone.)

30 minutes at 375ºF later, there were two perfectly-baked tilapia filets, each topped with a sprinkling of Old Bay seasoning and a lemon slice.  There was a pot of nutty rice, fragrant with thyme. There was a hot skillet, into which barely-steamed asparagus had been tossed with a little olive oil, garlic, salt, pepper, and a squeeze of lemon.  Fancier than a peanut butter sandwich or a bowl of ramen noodles, but it seemed not at all elaborate. It was just right.

Or maybe we were just hungry.

It’s said that hunger is the best sauce, but that doesn’t necessarily mean a physical need for food; the best sauce might be the desire to have a quiet dinner at home, at a decent hour, with some pleasant music playing, and the best possible company.

We cleaned our plates. 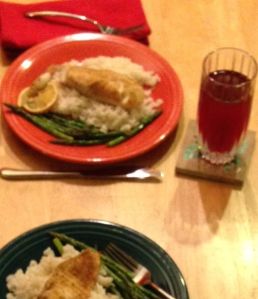 Tilapia, rice, asparagus. A glass of juice. Nothing more is required.

This entry was posted in Uncategorized and tagged Fish, Friday, Rice, Simple. Bookmark the permalink.

One response to “The Best Sauce”